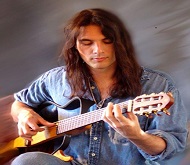 Born and raised in Akron, Ohio, Lino graduated college with two degrees (History and Pre-Med.) from Miami University of Ohio. But Lino's calling has always been to compose and perform music, so after college he moved to Los Angeles to do what he loves most.

Lino began studying guitar at the age of nine with classical master, George Bachmann. During his high school years, he was naturally drawn to rock music, although it never diverted him from his interest in classical. “I was very lucky to have been instructed in classical music before I ventured into the rock realm,” Lino explains. "It made me a well-rounded musician and gave me a lot to draw from as a composer later on. I learned to appreciate all styles of music, instead of just focusing on one particular genre.”  This is evident in Lino's incredibly unique and versatile layering of guitars in combination with acoustic and classical instruments and his bold blending of musical styles. And it's what makes his music so distinctive. “This style of music is very personal and exciting for me because it is the most honest music I have ever recorded. I don't try to accommodate the latest trends in a particular musical style or write music that would comfortably fit into a particular existing format,” Lino explains.

Miami Jam (released by Splash Entertainment/EverSound), which features a cover of Mason Williams’ Classical Gas, received rave reviews and charted well on NAR (#19 within two weeks of its release). Return to Avalon reached #11 on NAR within a month of its release received NAC airplay (through NAC Record Promoter, Roger Lifeset-Peer Pressure Promotion) as well as DMX, MUZAK and Soundscapes. Satin Blue reached recognition in the top 40 NAV charts within a month of its release with the title track receiving NAC airplay nationwide as well as features on DMX, MUZAK, Soundscapes, previously on The Weather Channel and cable music stations. Music from all three releases is being targeted for placement in major motion pictures, television and cable programming.

Lino's composing skills are also in demand in the television and film industry.  Lino also enjoys writing for local television and film production and recording and producing other artists in his own J-Wolf Studios located in Bend, OR. In addition, Lino performs on other artist's recordings, most recently for (SAGA lead singer) Michael Sadler's solo release Clear (michaelsadler.com).

For additional info, and to sample Lino´s music, visit: www.linomusic.com