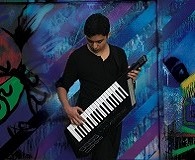 Nitish Kulkarni is an Indian-American music producer and mix engineer, and one of the most sought-after Marathi arrangers in the United States today.

Originally a tabla player, Nitish turned his attention to the art of recording and music production during his college years. His instrumental music features a unique blend of instruments from all around the world in a modern context. His debut album SYNESTHETIC, produced by award-winning composer John Adorney, scored 98/100 on New Age Music Odyssey and won the website's award for Best New Age music album of 2014. The second effort, LISTEN., followed in March 2018.

Since 2005 Nitish has been performing nationwide. He has played tabla, percussion, and keyboards in a combined total of over one hundred concerts and has several co-direction and productions credits to his name as well. Key performances have included concerts with Shridhar Phadke, Padmaja Phenany-Joglekar, Ustad Amjad Ali Khan, and the prestigious Jacobs School of Music Concert Orchestra. A track produced in collaboration with Enrique Ponce was premiered at the Berklee College of Music international campus in Valencia, Spain in 2016. His most recent collaboration project VITTHAL, featuring 15 artists from around the country, went viral in India in summer 2019.

Nitish holds a Bachelor's Degree in Organology and Music Production from Indiana University and a Master's in Music Production, Technology, and Innovation from Berklee College of Music. He is now based in Fort Wayne, Indiana, where he is a Sales Engineer at Sweetwater. The videos he has worked on in conjunction with the company’s marketing team have garnered over 100,000 views.